There are a lot of ingredients in sunscreen that may also harm coral reefs. There is no official recognition that these ingredients are unfriendly to reefs. But, just because it isn’t yet a requirement to avoid including these ingredients in lotions doesn’t mean it’s a good idea. Mostly, they are still likely to be harmful to the coral reef and avoided as best as possible.

Banana boat don’t offer a sunscreen that is completely reef safe. they claim all their product are reef friendly apart from their high SPF range. However, their definition of reef-friendly is based on the two ingredients mentioned above and not all of the ingredients that are slowly being recognised more widely as harmful to ocean life. Let’s take a look at a few popular banana boat sunscreens and find out how reef friendly they actually are.

Banana boat Ultra protect faces is a popular sunscreen and a great choice if you aren’t planning to go into the ocean near a coral reef. In my opinion Banana boat ultra protect isn’t reef safe because it contains Octocrylene, an ingredient, which according to our ingredient list below, is harmful to coral reefs.

Octocrylene is banned in Hawaii, although how exactly this ban is enforced is unclear. The reason why Hawii banned this ingredient is because it can bleach coral reefs and also cause brain deformities in fish lava.

Banana boat ultra protect also currently contains Oxybenzone, one of the most dangerous ingredients for reef life. It isn’t easy for sunscreen brands to create reef friendly sunscreens and usually only mineral sun lotions are friendly for ocean use. Banana boat ultra protect isn’t reef friendly but does offer strong sun protection and is waterproof. If you plan to only dip into a swimming pool on your next holiday this is a good sunscreen but in my opinion you should use a different brand for ocean swimming. 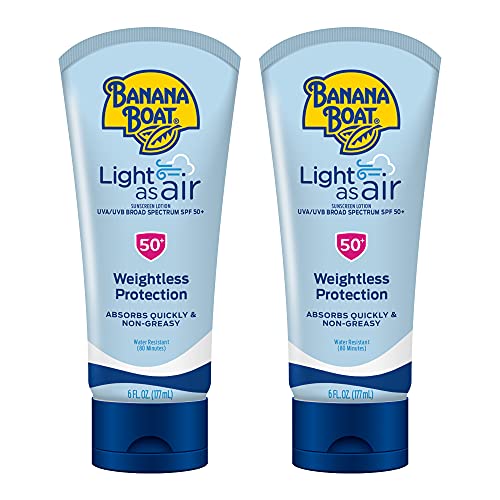 When I compared banana boat vs Coppertone, light as air was one of my favourite choice sunscreens. The texture is light, it absorbs well into your skin and offers strong sun protection. This is another great choice for when you aren’t bathing or swimming in the ocean. However, if you are going into the ocean and especially if you will be near coral reefs, this is a bad choice. Banana boat light as air contains Avobenzone, Homosalate, Octisalate and Octocrylene. These 4 ingredients are all on our list of ingredients to avoid that you can see later in this article.

Is Banana boat allowed in Hawaii

What makes a sunscreen reef safe

Oxybenzone and Octinoxate are 2 ingredients often used in Sunscreens that are known to be damaging to the reef but there are a number of other ingredients you should avoid, which we will list below. A lot of sunscreen brands also use Avobenzone, Homosalate and Octocrylene which are also seen by the Hawaii tourism board as being harmful to coral reefs.

Octocrylene – The center for biological diversity write about how this ingredient can cause brain deformities in fish lava and cause reproductive toxicity. It may also have a bleaching effect on corals.

Homosalate – This chemical doesn’t break down easily and traces of this chemical have been found on sea life and corals. Exactly what affect it has on them isn’t clear yet but it seems like it’s better to avoid this ingredient if you want to be completely reef safe.

Oxybenzone – is one of the worst ingredients for coral reefs so make sure to avoid it if you want to be sure your sun screen is reef friendly.

Octinoxate – Octinoxate and Oxybenzone were both banned in Hawaii in 2018. These are 2 ingredients that are recognised most widely as not being reef safe. Octinoxate is dangerous for coral reefs because it is an endocrine disruptor. This means that it can interfere with the hormones of marine life, including coral reefs.

Octinoxate has been shown to cause reproductive problems in fish and other marine life. It is also believed to contribute to the bleaching of coral reefs.

Paba, Parabens, Triclosan, Nano sized zinc or titanium, Avobenzone and Octisalate are other ingredients that could be unsafe for coral reefs although there isn’t a lot of research for all of them, it’s best to avoid them if possible.

To summarise this article, some Banana boat sunscreens contain ingredients that are banned in Hawaii because of the harm they can cause coral reefs. These ingredients are not reef friendly or reef safe and shouldn’t be applied when swimming or stepping into the water near a coral reef because they can harm the corals and sea life.

If you are visiting the ocean near coral reefs but not stepping foot into the water then feel free to use Banana boat, we would recommend their light as air formula, but please avoid wearing them in the reef until more research has been done to better understand and prevent the damage they can do to coral reefs.