Supergoop, as far as reef-safe SPF goes, offer one mineral sunscreen that the brand claim in their marketing is reef safe. This clean reef safe sunscreen is the brands Supergoop mineral sheerscreen. However the brand don’t appear to use ingredients that aren’t reef safe until you look at their non-mineral based sun creams and lotions.

If you look a little closer at supergoops product ingredient lists and marketing it appears that most of their sun protection products are reef-safe and they are working to be “the leader in developing feel-good clean sunscreen, and we were the first to create an SPF without oxybenzone. Today, we’re committed to ensuring that every product is reef-safe, cruelty-free, and in the most environmentally-friendly packaging possible”

However, the brands sun care products that aren’t mineral based mostly contain Avobenzone, which is also a petrochemical. According to biological diversity Avobenzone is an “endocrine disruptor which means it can lower a coral reefs resistence against rising ocean temperatures that are destroying reefs around the world as global warming increases.

If you want the best chance of your Supergoop cream being reef-safe, choose a product in the brands mineral range and look closely at the ingredients for each individual product. We have listed some of the most popular sunscreens from Supergoop and whether or not they contain these reef unfriendly ingredients or not. 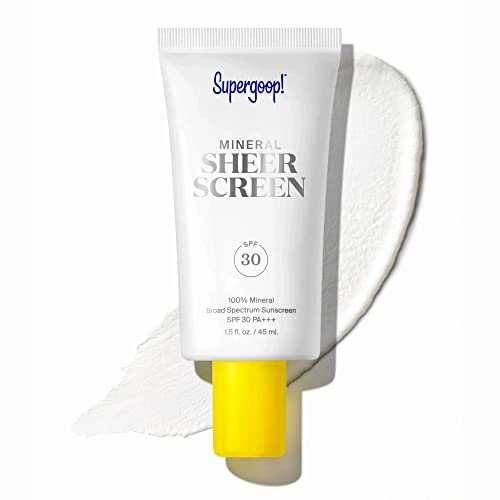 Click image above to view Supergoop mineral sunscreen on Amazon

Oxybenzone and Octinoxate are 2 ingredients often used in Sunscreens that are known to be damaging to the reef but there are a number of other ingredients you should avoid, which we will list below.

Supergoop do claim to use Octinoxate in their Healthy Glow Sunless Tan SPF 40 cream, but having removed this ingredient from products they used to sell, they are working to remove it completely from this cream as soon as possible.

A lot of sunscreen brands also use Avobenzone, Homosalate and Octocrylene which are also seen by the Hawaii tourism board as being harmful to coral reefs.

Comparing Supergoop products | Are they reef safe or not?

The Supergoop NO list – ingredients the brand never uses

Supergoop have written an extensive list of ingredients they don’t use in their products. We aren’t going to list them all here but instead, look to see if we can find any that could be damaging to a reef.

Supergoop glow screen isn’t reef safe because it contains Avobenzone, Octocrylene and Octisalate which both Save the reef and the HEL chemical pollutant list claim aren’t safe for use in the ocean near to a Coral reef.

How reef friendly is Supergoop sunscreen

Supergoop aren’t a brand that offer 100% clean and reef safe products, even though they might claim that they do some of their products contain questionable ingredients and ingredients that are recognised by some organisations as being unsafe for use in the ocean near a coral reef.

Supergloop Mineral Sheer screen is the only product  from Supergoop that I could find that appears to be reef safe. Most of the non-mineral based sun protection formulas contain Avobenzone, homosalate, octisalate and octocrylene. Whereas the mineral suncream formulas contain zinc oxide and titanium dioxide.

These ingredients are only listed as being – non-nano particles ( better for a coral reef ) in the Sheer Sunscreen formula so it isn’t clear whether they are nano particles in the other formulas but we presume they will be. Protecting Coral reefs and sea life is important so be sure to try and use a reef safe sunscreen if you’ll be swimming or bathing near a reef.