Anyone who has one eye on the fashion world knows two of the most remarkable Italian fashion houses, Versace and Gucci.

These two brands are on every fashion weeks runway, in all the major department stores, and grace lifestyle magazine covers all around the world.

Both Gucci and Versace boast unique designs and regularly create statement pieces, whether handbags, clothing, jewellery, fragrances or accessories, that any fashion aficionado would be drooling over adding to his/her collection.

The brand logos of Gucci and Versace are internationally known and recognisable, and both brands pride themselves on top-of-the-line quality and superior craftsmanship across all their goods.

With all that in mind, let’s take a look at some mind-blowing fashion items from Gucci and Versace. Then let’s compare the differences between the two captivating fashion brands.

I’m going to share some little known info about their origins and epic history in fashion Before we look at their future brand direction and compare styles.

Versace and Gucci both have their own unique styles.

Versace have a reputation for designing more flamboyant clothing and accessories.

These designs often capture our attention with their bright colours and flashy prints. If you wear a Versace piece, the statement you make can be as bold and creative as your imagination desires.

Versace clothing is often provocative and eye-catching because of the brands use of the most flamboyant and creative blends of different colour tones and patterns.

You probably can’t name all of the colour tones in a Versace outfit and if you can you’ll either be blown away by the way this blend works! Or overwhelmed and not feeling like expressing yourself with such an audacious and out there style.

When Versace design something bold they never settle for less than blowing everyone away and forcing them to talk about the piece.

This doesn’t mean you won’t find timeless, elegant Versace designs. They have created some timeless classic bag designs and many contemporary bold and sexy dresses worn by celebrities on red carpets in world theatre.

Gucci aren’t as bold in their designs as Versace are. In recent year Gucci have began to grow and reinvent themselves as an innovative and progressive brand with a much more modern approach to fashion.

They are still known for their contemporary high fashion luxury designs and some timeless bags although not as feminine as when we compared Gucci and Chanel and found Chanel to be the more sexy and feminine fashion designer.

Gucci designs often have a romantic, beauteous and eclectic feel to them which attracts the younger consumer to their clothing and bags. Where Versace might struggle is attracting the younger, modern consumer who is looking for a more feminine and innovative style.

A comparison of Versace and Gucci bags

Gucci have embraced and exceeded all expectations with their luxury bag designs for a long time. Gucci don’t create the exquisite patterned canvas bag designs of Louis Vuitton but Gucci bags are remarkably beautiful and their designs are often very simple.

Famous Gucci bag designs include the Marmont, Horsebit and Dionysus. For me the Gucci Marmont has to be one of the most recognisable high fashion bag designs on the high street.

Versace have created a luscious collection of bags in their Virtus range. This is one of my favourite bag collections, I love the supple black leathers and the embellished gold chains strap and Barocco style V logo is magnificent, I love it.

Gucci and Versace both create some stunning designer belts but I much prefer Gucci belts.

Gucci sell their famous black belts with the large double G logo on then front, a very popular style of belt over the past few years amongst men and women who love high end fashion.

Versace belts often include their signature gold buckle design and sometimes include a gold V buckle, but they don;t have the same appeal as Gucci’s simple black belt designs with the double G logo everyone craves.

Price comparison Gucci vs Versace which is more expensive?

The brand Gucci is at least 3 times more expensive than Versace, when talking about the value of the company as a whole. When considering the price of the brands products their ranges of sunglasses, perfume and clothing are all priced in a similar high-end range.

The prices within each brands range of products varies a lot depending on materials and the detailing on more finely crafted pieces, which is especially the case with the Gucci Horsebit design and some of the more elaborate Versace dresses, which have been hand crafted.

If there isn’t any gold detailing then you’ll see many Versace sunglasses designed with animal print and flower patterns.

My absolute favourite Versace women’s sunglasses are these Versace Baroque sunglasses. Take a look in awe at this beautiful red metal frame and the red leather detailing and gold patterns. 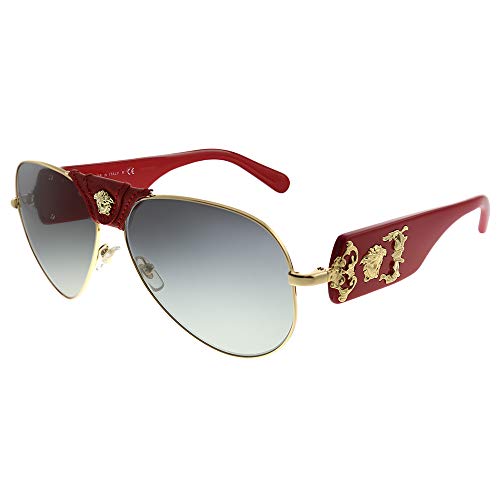 Click the image to view these Sunglasses on Amazon 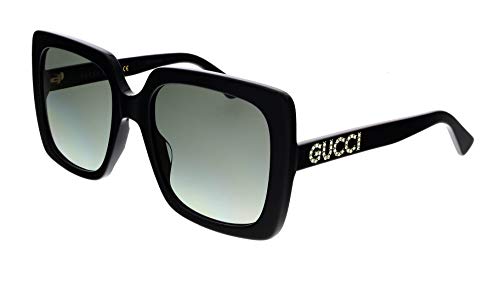 Gucci was founded by Guccio Gucci in 1921 in Florence, Italy. The company began as a leather luggage vendor, and Mr. Gucci also opened a workshop so that local leather workers could craft original pieces for him. Gucci began as a family business, with the founder’s sons working with him to design products and assist in making business decisions.

Though Gucci began working with leather products, the brand incorporated other materials into its designs when leather was scarce due to political and economic situations.

For example, in 1937 the League of Nations imposed a trade embargo on Italy due to Mussolini’s invasion of Ethiopia. This made leather scarce, so Gucci innovated and began using wood, linen and wicker, among other materials, to complete its designs. Another example is when Gucci began using canvas in its bags during World War 2, again due to leather shortages.

Gucci quickly expanded into creating more than just luggage and bags; soon the team was designing a full range of accessories, such as gloves, belts, shoes and wallets.

In the 1970s Gucci launched its perfume and timepiece lines, and in doing so expanded into different types of products outside its original realm of expertise.

Soon, there were thousands of different Gucci products available, as everyone wanted to buy into the chic luxury brand.

Gucci leadership stayed in the family until the 1980s, when it became a publicly traded company due to in-fighting within the Gucci family. In 1989, the company brought on Dawn Mello and Tom Ford as top designers.

This marked a directional change for Gucci, as the product line was reduced to refocus the brand as being exclusive and elite.

In 1999, the French luxury conglomerate Pinault Printemps Redoute bought 40% of Gucci, which further cemented the brand’s place within the European luxury sphere. Today Gucci channels chic and sophisticated, yet trendy and hip, designs.

The Versace logo depicts Medusa, the Greek mythological figure with snakes in the place of hair who would tempt people into falling in love with her and then turn anyone who looked at her into stone. Versace hoped that his clothing would have a similar mesmerising effect on consumers.

Versace quickly began branching out, and within a few years of opening his boutique he expanded his designs to include home furnishings, china, accessories and more.

Gianni Versace was tragically murdered in 1997 outside his home in Miami. His sister Donatella took over as creative director, and his brother Santo headed up the company as CEO. Since then, the brand has continued its trajectory of wowing with big, bright designs.

In 2000, Versace expanded into the hospitality industry- the first fashion house to open its own hotels- with the establishment of the Palazzo Versace, an extravagant hotel in the Gold Coast of Australia.

A second Palazzo Versace was completed in the opulent city of Dubai, and a third is planned to open soon in the casino-centric city, Macau.

Versace has been the fashion brand of choice for many a red carpet event. A notable highlight that any pop culture fan can reference would be the black safety pin dress that Elizabeth Hurley wore to the 1994 Four Weddings and a Funeral preview as Hugh Grant’s date.

Another would be the green silk chiffon dress which Jennifer Lopez wore to the 2000 Grammy’s, which featured an open V-neck which went down to her navel.

Conclusion – Is Versace better than Gucci?

Now that you have an overview of Gucci and Versace as brands, you can see how both prestigious companies have successfully grown from their more modest beginnings into two powerhouse fashion houses.

Gucci’s more streamlined, classic style contrasts with Versace’s flamboyant designs, but lucky for the fashion industry, there is room for both brands to thrive.

I love Gucci belt designs much more than Versace, but Versace have the much more appealing and recognisable range of sunglasses. If you are looking for a beautiful handbag, You’ll most likely choose Gucci, unless you find a Versace signature piece that offers something really unique and special.

Gucci and becoming the more innovative brand, with a focus on the younger generation of girls looking for modern luxury fashion items that are on trend.

Versace might struggle a little more to stay on trend with their reputation for more extreme designs and they have a long way to go to reach the popularity of Gucci in fashion circles.